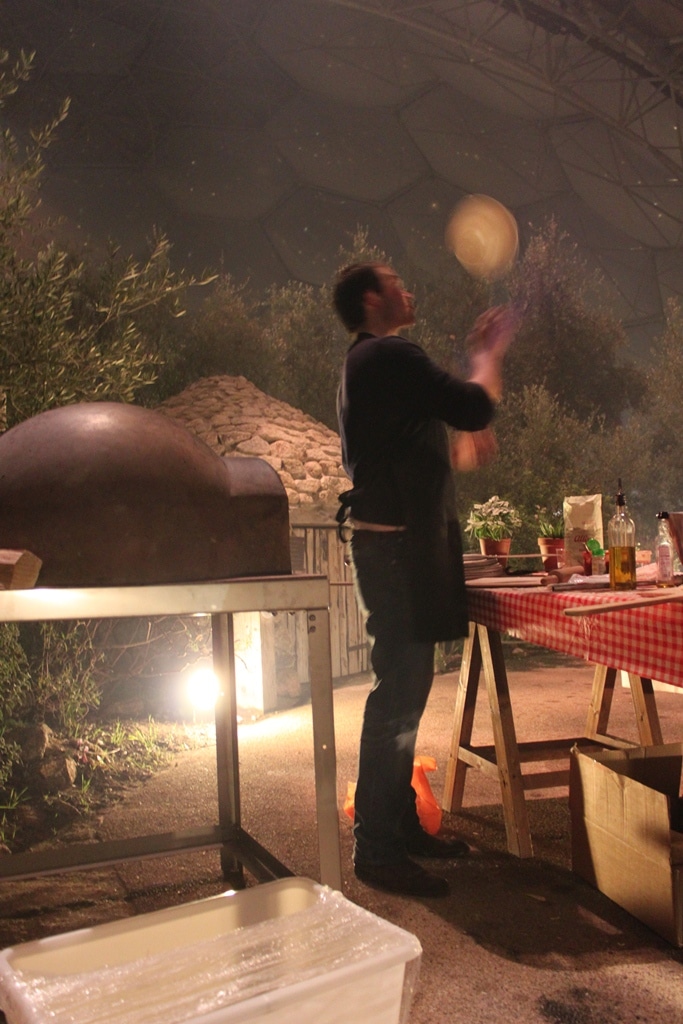 For the first time in 10 years the famous Eden Project was forced to close due to a disastrous flood leaving their restaurants under 3 foot of water and rendering a huge amount of catering equipment useless. The dedicated Eden staff worked around the clock to restore the damage that had been done, but new ways of producing food fast and of high quality were needed.

Each year the Eden Project receives a million visitors, with the catering out of action and eager to re-open, Eden had to revise a new dining solution as the damage created within the central “Link” building was going to take time and planning to restore to its former glory. The idea to introduce cooking stations within the Mediterranean Biome was born.

Tom Gozney, founder of The Stone Bake Oven Company had already demonstrated the new “Primo Oven” at The Eden Project. “Having previously served some freshly made pizza to the staff, we found that the Primo Oven was an immediate hit”, says Tom, and Eden had already decided to offer them in their own shop.

Tom and some of the Eden staff saw an immediate opportunity to contribute to the challenging situation the damaging floods had caused. “What could possibly be more fitting than Stone Bake Pizzas in the Mediterranean Biome” says Tom, “We shipped 6 mobile wood fired ovens out to them immediately,” and the Eden team were soon wowing hungry crowds with mouthwatering delicacies baked and roasted in the Primo Oven. With aroma’s filling the Mediterranean Biome, passersby can’t pass up sampling freshly baked Pizza slices and Garlic dough twists baked in less than two minutes before their eyes.

This is “the first time food has been available to buy in the Mediterranean Biome,” now anyone can enjoy “unique alfresco eating…in the warmth of our biome”, says the Eden Project. Tony Kendle,  Director of the Eden Project Foundation added “Good things can come out of disastrous situations – we had already been thinking of adding more of the experience of Mediterranean flavours and smells to the biome, and thanks to this great oven design it proved really easy to do”.

Made from refractory based clay, smoothly dome shaped, not dissimilar to the Eden’s Biome shape, the Primo Oven proves aesthetically pleasing and boasts low wood consumption.The Primo Ovens are also quick to set up, easy to use, and heat up in less than 15 minutes, making them the new UK favorite outdoor cooking must have.

Category: Featured
We use cookies on our website to give you the most relevant experience by remembering your preferences and repeat visits. By clicking “Accept”, you consent to the use of ALL the cookies.
Cookie settingsACCEPT
Manage consent

This website uses cookies to improve your experience while you navigate through the website. Out of these, the cookies that are categorized as necessary are stored on your browser as they are essential for the working of basic functionalities of the website. We also use third-party cookies that help us analyze and understand how you use this website. These cookies will be stored in your browser only with your consent. You also have the option to opt-out of these cookies. But opting out of some of these cookies may affect your browsing experience.
Necessary Always Enabled
Necessary cookies are absolutely essential for the website to function properly. These cookies ensure basic functionalities and security features of the website, anonymously.
Functional
Functional cookies help to perform certain functionalities like sharing the content of the website on social media platforms, collect feedbacks, and other third-party features.
Performance
Performance cookies are used to understand and analyze the key performance indexes of the website which helps in delivering a better user experience for the visitors.
Analytics
Analytical cookies are used to understand how visitors interact with the website. These cookies help provide information on metrics the number of visitors, bounce rate, traffic source, etc.
Advertisement
Advertisement cookies are used to provide visitors with relevant ads and marketing campaigns. These cookies track visitors across websites and collect information to provide customized ads.
Others
Other uncategorized cookies are those that are being analyzed and have not been classified into a category as yet.
SAVE & ACCEPT
0
0
Your Cart
Your cart is emptyReturn to Shop
Continue Shopping