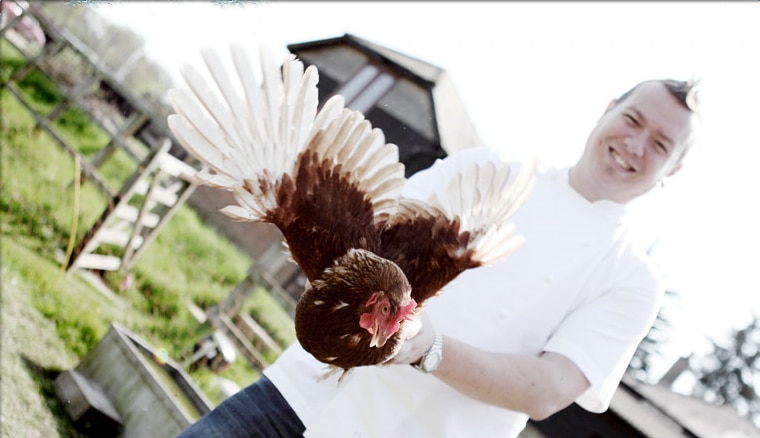 The Pig is the New Forest’s most anticipated new restaurant and hotel. Having

opened its doors in July 2011, it’s received excellent reviews from industry critics and even more raving reviews from paying guests.

Fast becoming known for its excellent restaurant, The Pig which is owned by the prestigious Lime Wood Group, is a boutique hotel with a traditional country kitchen. A modern twist on a country house, the concept for The Pig originates from former Starwood marketing supremo David Elton and director Robin Hutson who is a former Soho House board member and co-creator of Hotel du Vin.
At the helm of the restaurant is Head Chef James Golding. Armed with previous experience at the Ivy, Caprice and Soho House New York, James has even cooked at the Oscars in 2005.

The Pig menu boasts food excellence, with 80% of the ingredients used in the kitchen, sourced from the surrounding countryside.

Central to the outdoor courtyard, is a grand looking wood fired oven by the Stone Bake Oven Company. During the original courtyard refurbishment, Tom Gozney, The Stone Bake Oven Company founder was excited to be part of the development. “It’s great to be associated with such a prestigious hotel” says Tom, “together we worked on designing an oven finish that suited the Pig’s courtyard, the outcome was a beautiful design, utilising reclaimed red bricks.”

James Golding the Head Chef said “I love the oven! The service (from The Stone Bake Oven Company) was very good, Tom and his team were very professional and open to ideas from myself, as well as the building process Tom was on hand to train the team from the lighting process and aftercare of the oven. Really they were hands on from start to finish,” says James.

The results spoke for themselves, the Gio 120 oven easily catered for the opening party of 450 people for pizza style flatbreads. “They cooked in under 2 minutes, so we had a steady flow of food all evening, and the chefs were able to design their own toppings so a great team building tool too,” says Head Chef James.

Most importantly the wood fired oven seems to be a point of difference in a competitive restaurant market, “it obviously attracts customers and allows you to be that little bit different. We also have started to do plank roasts and pot roasts in there” says James.

“Not many can imagine much better than sitting on The Pigs terrace sipping a cold glass of champagne and eating some freshly baked flat bread pizzas. Even the smell from the burning oak oven is a comforting experience,” says James.

Images courtesy of the Pig Hotel.

Category: Featured
We use cookies on our website to give you the most relevant experience by remembering your preferences and repeat visits. By clicking “Accept”, you consent to the use of ALL the cookies.
Cookie settingsACCEPT
Manage consent

This website uses cookies to improve your experience while you navigate through the website. Out of these, the cookies that are categorized as necessary are stored on your browser as they are essential for the working of basic functionalities of the website. We also use third-party cookies that help us analyze and understand how you use this website. These cookies will be stored in your browser only with your consent. You also have the option to opt-out of these cookies. But opting out of some of these cookies may affect your browsing experience.
Necessary Always Enabled
Necessary cookies are absolutely essential for the website to function properly. These cookies ensure basic functionalities and security features of the website, anonymously.
Functional
Functional cookies help to perform certain functionalities like sharing the content of the website on social media platforms, collect feedbacks, and other third-party features.
Performance
Performance cookies are used to understand and analyze the key performance indexes of the website which helps in delivering a better user experience for the visitors.
Analytics
Analytical cookies are used to understand how visitors interact with the website. These cookies help provide information on metrics the number of visitors, bounce rate, traffic source, etc.
Advertisement
Advertisement cookies are used to provide visitors with relevant ads and marketing campaigns. These cookies track visitors across websites and collect information to provide customized ads.
Others
Other uncategorized cookies are those that are being analyzed and have not been classified into a category as yet.
SAVE & ACCEPT
0
0
Your Cart
Your cart is emptyReturn to Shop
Continue Shopping